Should you use a smartphone app or dictaphone for medical dictation?

Medical dictation using speech to text software is one of the most effective ways to streamline clinical documentation. But if you’re new to dictation or revisiting your dictation workflow, you might be wondering: should I use a smartphone app or dictaphone for recording and transcribing clinical notes?

Dictaphones have been valuable business tools for decades. Ten years ago they were the only reliable way to dictate clinical notes or other professional recordings for later transcription.

With early dictaphones, a physician would record their dictation on the device and a transcriptionist would listen to the recording and type the note. But as technology progressed, it became more common to automate transcription using AI-powered speech to text software.

In either case, if you’ve dictated clinical notes in the past, you might have used a dictaphone that looked like a TV remote and plugged it into your computer via a USB cable. The dictaphone either recorded the note for asynchronous transcription or connected to a voice recognition software that transcribed it in real-time.

But today there is an easier way. Most doctors already have a more powerful dictation machine in their pocket at all times: the smartphone.

Smartphones are an easy replacement for dictaphones

As recently as a few years ago, technology experts might have recommended a dictaphone over a smartphone app for medical dictation. They would have said that dictaphones have longer battery life, better sound quality, are easier to use, and have more features than a smartphone app.

But that’s no longer the reality. For example, consider these specs for modern smartphones like the iPhone 12 and the Samsung Galaxy S20: 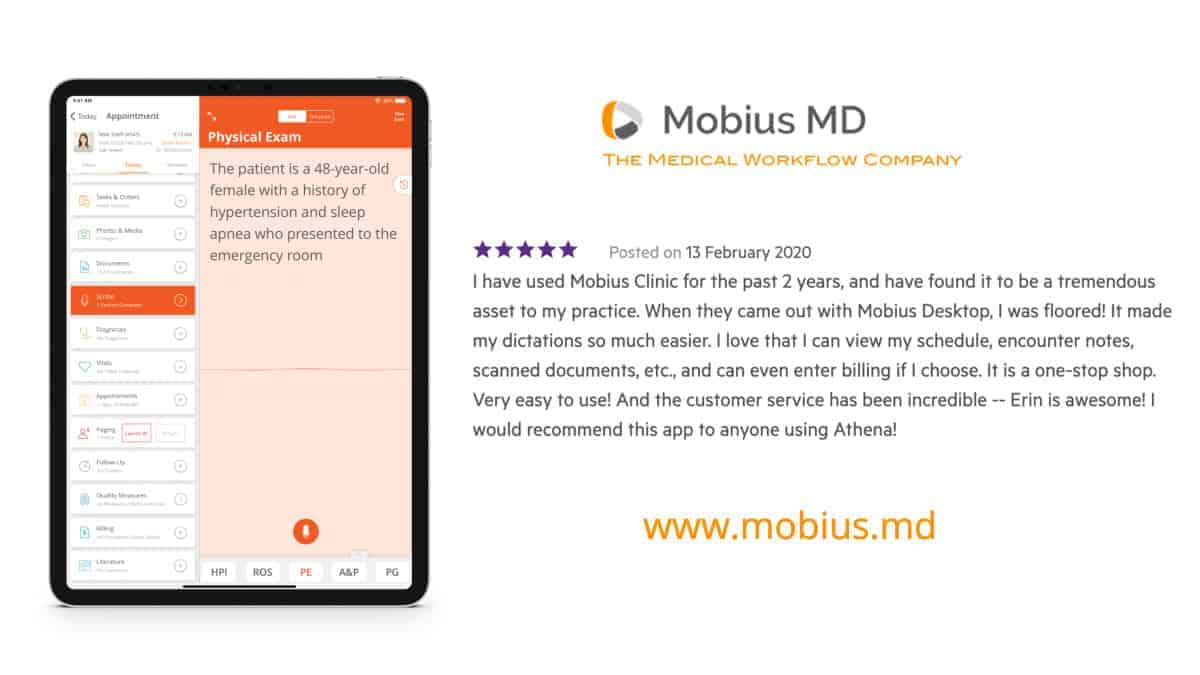 As you’re probably seeing, modern smartphones come with all the technical requirements necessary to replace a traditional dictaphone. And with the right mobile dictation app, they offer a few obvious benefits.

Let’s use the example of Mobius Scribe, one popular dictation software for doctors who use macs.

Your smartphone is always with you, which is probably not the case for a dictaphone. Whether you want to dictate into an app on your desktop or directly into the EMR from your smartphone, Scribe makes it easy.

Apps like Mobius Scribe also allow you to record voice memos to insert into the EMR at a later point. So if you change work stations, are working from home, or want to dictate clinical notes in the car, you don’t have to wait. Smartphones offer a convenient mobile dictation solution that never leaves your side.

Depending on your dictation and transcription workflow, using a dictaphone may create lag times before your clinical notes are complete. Mobile medical dictation uses voice recognition software so your words appear on the screen as you speak.

Apps like Mobius Scribe use deep learning and neural net technology to provide the most accurate voice recognition software on the planet. Scribe gets even better as you use it, and like most medical dictation apps it understands medical terminology out of the box.

Making medical dictation efficient requires that you integrate it carefully into your clinical documentation workflow.

Mobile apps like Mobius Scribe connect directly to the EMR so you can easily access everything in one place. You’ll save time by being able to quickly switch from dictating notes to scheduling or accessing results documents in a single interface.

By now the answer should be clear. Busy doctors looking for efficiency and simplicity will find that a mobile app on their smartphone is the easiest way to dictate clinical notes. If you’re looking for a streamlined speech to text workflow, look no further than the smartphone in your pocket.

The best dictation software for doctors who use Macs