Medscape’s Physician Compensation Report is widely known as the go-to source for salary information and other factors affecting US doctors’ income. But tucked among the statistics about which specialties feel fairly compensated, you’ll find numbers that also tell a story about work hours and burnout.

To be sure, Medscape also has a Physician Burnout & Depression Report. While insightful, that survey only tells part of the story. The Burnout Report doesn’t summarize hours spent on paperwork or other variables that help connect burnout to problems and solutions from digital health.

Taken together, the compensation and burnout reports raise some interesting questions about EHRs, physician burnout and how mobile health might help.

What contributes to physicians’ burnout?

Medscape’s Burnout Report tells us what we already know about EHRS, but it bears repeating.

Respondents who reported burnout were allowed to select more than one contributing factor. Over half (56 percent) said that an excess of bureaucratic tasks like charting and paperwork is what’s dragging them down. 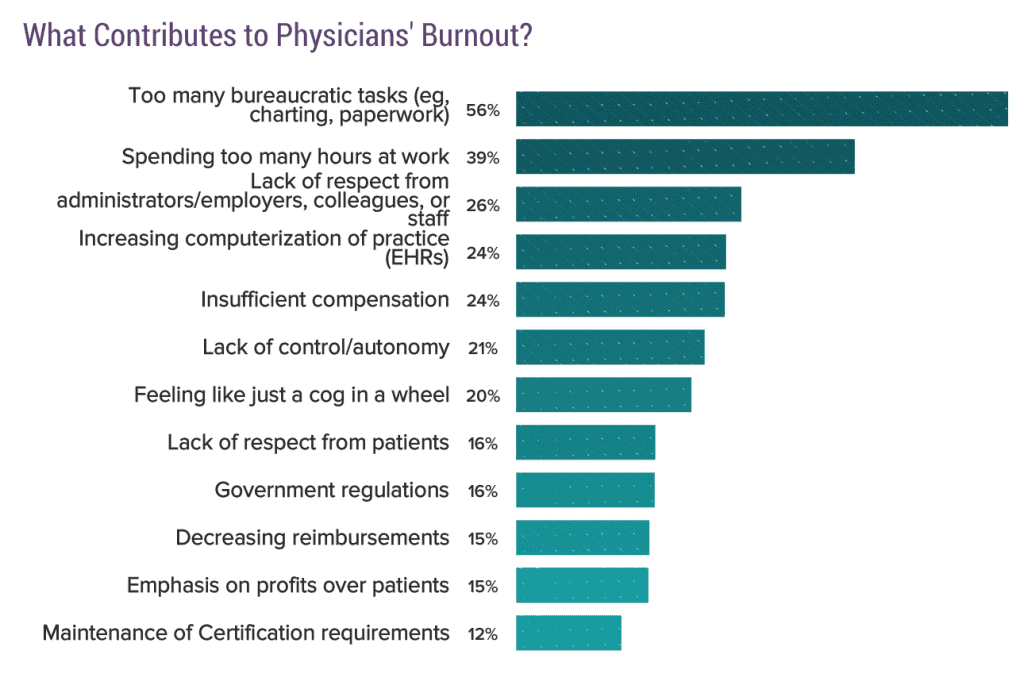 Notice that the second most popular choice is long hours, while lack of respect comes in third. A close fourth – tied at 24 percent with “insufficient compensation” – is frustrations with EHRs.

This number is incredible, but will surprise few. Nearly a quarter of respondents who experience burnout say “increasing computerization of practice” is a contributing factor. While EHRs were designed to make health care more efficient, doctors’ frustrations around the switch to digital have become a trope.

Hours per week spent on paperwork and administration

The reason doctors are frustrated with charting and admin work is simple. 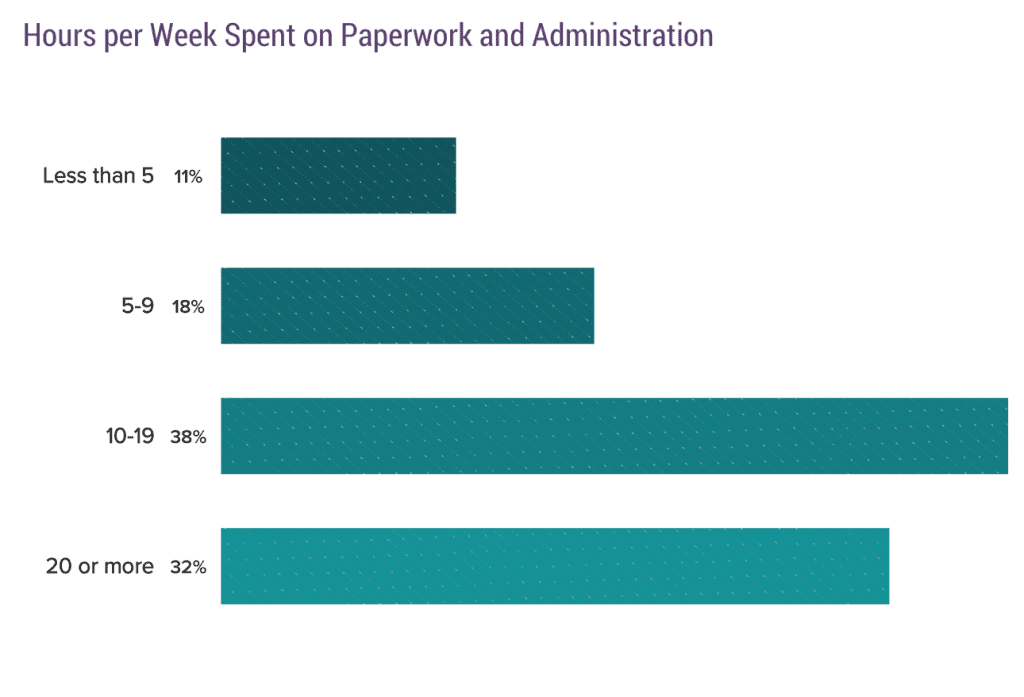 As physicians spend more hours on paper and administrative tasks, EHR adoption has risen. While correlation isn’t causation, it’s clear that EHR adoption isn’t reducing time spent on paperwork and charts. EHRS haven’t helped most doctors get back time for the parts of medicine they care about – but they should.

“While EHRs were designed to make health care more efficient, doctors’ frustrations around the switch to digital have become a trope.”

What is the most rewarding part of your job?

What do doctors care about? For the third year in a row, physicians have cited “gratitude/relationship with patients” as the most rewarding factor of their profession. 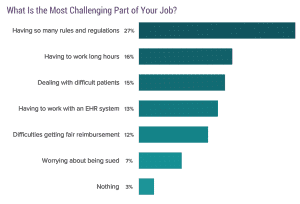 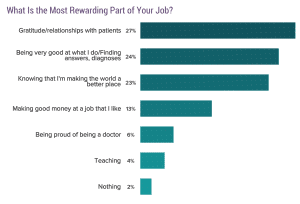 Now flip to the next slide and notice that when physicians are asked about the most challenging part of their job, “having to work with an EHR system” comes in fourth.

You’re beginning to get the picture.

What if mHealth could help?

What if EHRs and the “computerization of practice” weren’t among the top challenges reported by physicians? What if doctors felt that digital health was making their job easier, not worse? What if Medscape’s 2020 survey finally reported that physicians were spending fewer hours on paperwork and administration?

This is the vision behind Mobius MD and other companies working to make mobile a part of medicine. Mobius Clinic is the revolutionary, office-proven app that eliminates up to 90 percent of the EHR work on every patient visit.

By making smartphones a clinical tool, physicians can get back hours of lost time every week. Doctors use Mobius to automate their workflow with modern charting tools, so they can spend time with patients instead of their computer. 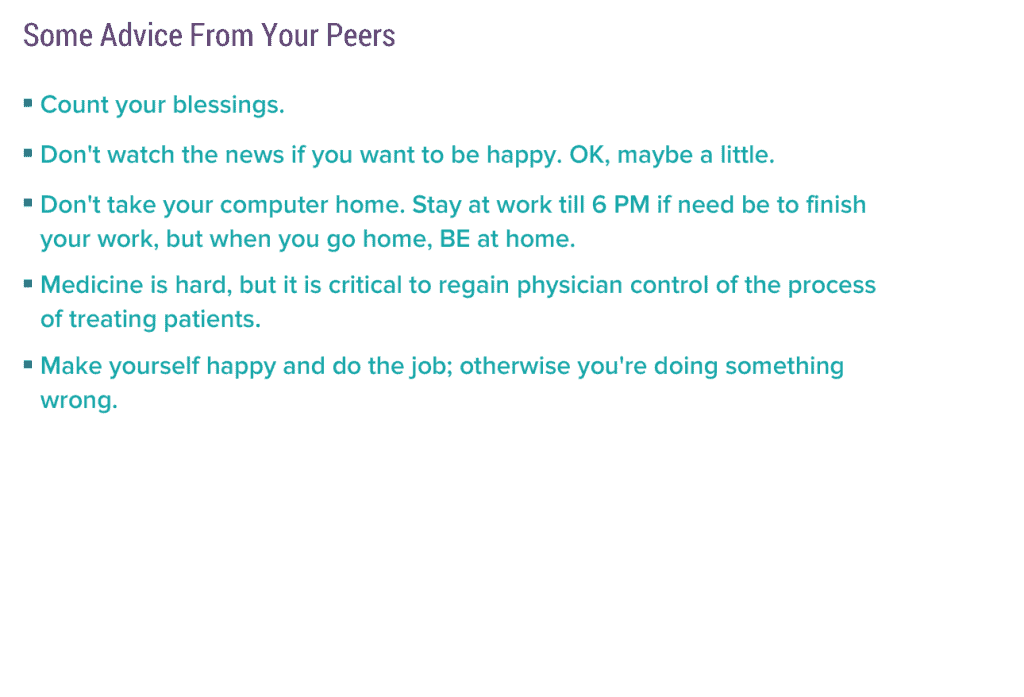 At the end of their Burnout & Depression Report, Medscape offers “Some advice from your peers.”

To this great list of tips to avoid burnout, doctors using Mobius would add one idea: Build an efficient practice by using your smartphone as a clinical tool.