A brief history of medical transcription

In the intervening years both the purpose and process of medical transcription have changed. We now convert spoken physician reports into text not only for research and teaching purposes but also to improve patient outcomes. And as for the process? Let’s just say that electronic tablets are pretty different than papyrus.

The history of medical transcription

Medical transcription didn’t become mainstream until medical record keeping became common in Europe and America around 1900. Before then, some doctors wrote down case histories for basically the same reason the Egyptians did in 1600 BC – to remember what works and teach others. It wasn’t until the early 20th century, when hospitals began evolving into major healthcare centers, that medical records became a common method for improving patient outcomes.

With widespread hospital record keeping, standardization of medical data became critical for research. Instead of doctors providing care and taking notes, a new profession emerged – the medical stenographer or transcriptionist. For most of the 20th century it became common for scribes to record physician notes in shorthand.

Transcribed medical notes evolved with technology, from hand-written to typewriters to computers. Audio recordings brought an initial wave of change, allowing transcriptionists to record physician notes after the patient visit. The internet eventually made medical transcription the process we think of today, in which a doctor takes dictations and a remote scribe transcribes them.

Dictation technology has made huge progress in the past decade. By automating most of the transcription process, new tools are improving efficiency in healthcare documentation.

An example of NLP in action is Mobius Scribe, a live transcription function for smartphones and tablets that’s part of the Mobius Clinic suite of applications. Scribe draws on NLP technology developed by transcription giant Nuance to provide the world’s most reliable speech-to-text medical dictation. With Mobius Scribe, physicians can dictate to a patient’s EHR and instantly have an accurate transcription recorded in the patient’s record. 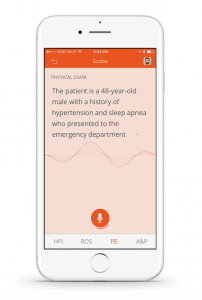 Like the EHR more broadly, changing the process of medical transcription does more than create efficiencies. It also changes the physician’s role and how providers interact with patients.

Take Dr. Casillas for example, an orthopedic surgeon in San Antonio, Texas. Casillas uses Scribe to record notes in the EHR while meeting with his patients. “I like dictating the history, physical exam and my plan in front of the patient,” he explains, “because I can pause and ask them, ‘Is there anything I should have added or emphasized?’ They like to hear that I can dictate everything, and for me it’s a matter of convenience that it’s all documented.”

By taking the best dictation technology mobile, applications like Mobius Scribe are taking the next logical step in the evolution of medical transcription. Using the smartphone as a clinical tool, live transcription allows providers to make medical dictation a positive part of patient care.

4 reasons to upgrade from Dragon to Mobius