Is it OK for doctors to use smartphones in front of patients?

September 3, 2019 in mhealth, Patient Engagement, Technology, There's An App For That 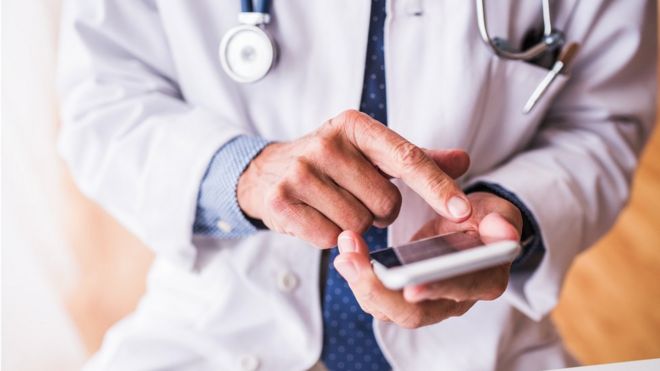 Phone etiquette is changing fast, and it’s not always clear when and how it’s acceptable to use a smartphone. Everyone has had the experience of taking out their phone at a social gathering to send a text or look something up. While this can sometimes feel rude, using a smartphone in public has become widely acceptable in most places. But is it OK for doctors to use smartphones in front of patients in a clinical setting?

Should doctors use smartphones in front of patients?

The short answer is “yes.” As we discussed extensively on our blog, smartphones and tablets can be valuable tools in a clinical setting. Healthcare professionals use their devices for medical reference, accessing electronic health records, data collection and much more.

But despite their widely acknowledge value, research finds that using mobile devices in a clinical setting is still somewhat taboo.

Perceptions of smartphone use in medicine

A study published in the International Journal of Telemedicine and Applications surveyed over 700 medical students in the U.S. about their perceptions of medical app usage and reliability. Unsurprisingly, the results show that future doctors see a lot of value in medical apps.

However, about half (53 percent) of respondents also said that using mobile devices in front of colleagues and patients makes them appear less competent. So medical students see value in using smartphones in a clinical setting, but they worry that doing so gives patients the wrong impression.

“About half of respondents said that using mobile devices in front of colleagues and patients makes them appear less competent.”

It turns out that this lingering hesitation is reflected in Americans’ views on smartphone etiquette in other settings. A recent poll found that 70 percent of respondents believe it’s inappropriate to have a smartphone out during a meeting.

An older study from Pew Research Center found similar results that also reveal how cellphone etiquette is changing. In 2015, only 38 percent of Americans thought it was OK to use a cellphone at a restaurant, and just 5 percent said the same about a meeting.

Bottom line is that the medical students are right. Americans still consider it rude to pull out a smartphone during a meeting. This is valuable information for healthcare professionals. Even as they embrace the benefits of mHealth, doctors should be conscious of how they’ use smartphones around patients.

Taken together, these studies suggest that cellphone etiquette is changing. The Pew report finds that young adults have higher tolerance for cellphone use in public and in social settings. Young people are also more likely to have used their phone during a recent social gathering.

As younger students progress into clinical work, they’ll do more than bring their digital native ease and acceptance of cellphones as a normal part of most social interactions. They will also have the confidence to use smartphones as the valuable clinical tool they can be.

How to effectively use smartphones in front of patients

There are a few things you should keep in mind if you’re still worried about using your smartphone in front of patients:

When you’re using your smartphone as a clinical tool, explain your behavior to patients. You may find that your smartphone can be a valuable way to engage patients in their own care.

Having a smartphone out in the exam room is a great opportunity to remember the communication skills you already know to use. Maintain eye contact, give patients time to speak, and use their first name. Effective clinical communication is far more important than the technology you use during the encounter.

Research shows that patients prefer doctors who don’t use a computer in the exam room. Consider how your smartphone can help move your EHR workflow from a desktop screen to a device that can be much less intrusive.

How to optimize patient encounters in spite of EHRs