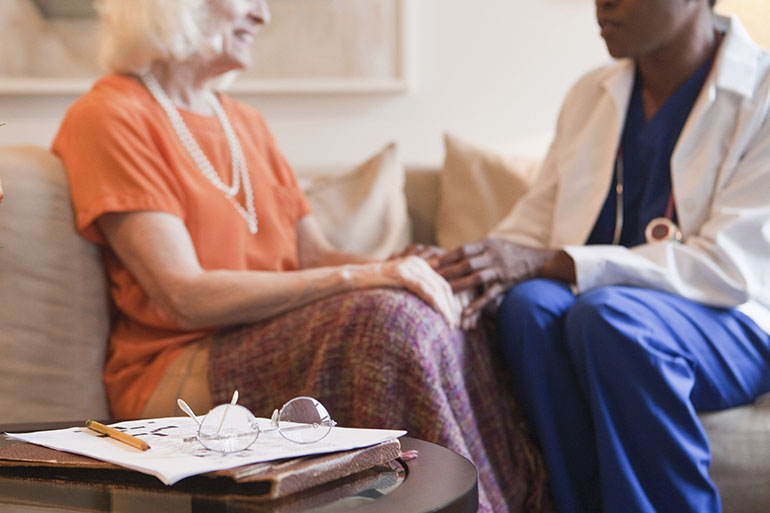 When most people think of physician house calls they imagine a quaint scene. A kindly, experienced doctor carrying a black bag knocks on the doors of the infirm. Just two decades ago, most observers would have said that this model of home based primary care was all but obsolete.

But recently house calls seem to be making a comeback. This article explains house calls and the forces behind their revival. These include: an aging society, consumer demand and new technology and payment models.

What are house calls?

A physician house call refers to any visit that a doctor makes to a patient in their own home. But modern house calls look only vaguely like that quaint idea from the 1930s. Today patients receive house calls through everything from community health programs to on demand services delivered through a mobile app.

House calls accounted for roughly half of doctor visits a century ago, making them relatively normal for anyone. Today they’re being targeted by Medicare and other payers as a way to reduce hospital and nursing home use while improving the lives of frail, high-cost and homebound patients.

But the young adult population is also getting interested in house calls. New apps and services make it possible for anyone to order a physician to their home, simply as a matter of convenience.

“Physicians go to the patient’s home, accompanied by a medical assistant, who does the driving. The medical assistants are also certified phlebotomists and during the appointment they do blood draws, strep tests, collect vital signs, and help with documentation.

The assistant carries a kit that contains almost everything you would have at a typical doctor’s office, including a stethoscope, otoscope, blood pressure cuff, thermometer, equipment to repair lacerations, etc…. If we need imaging or a referral, we make those arrangements.”

House calls are making a comeback

By the early 1990s it seemed reasonable to declare that house calls were dead. Over the last century, house calls dropped from 40% of all physician encounters in 1930 to less than 0.5% in 1996.

But in 1998 payment restructuring improved reimbursement. Physicians slowly began making more visits to patient homes. In the 2000s, the explosion of mobile technology and a growing elderly population gradually created more demand for house calls in the United States.

Today more patients are once again receiving house calls. But the number of physicians making them has decreased. While some providers still manage to work home visits into their regular practice, others are working exclusively as house call physicians offering “home-based primary care.” Various trends suggest that house calls are once again becoming relevant.

Forces behind the house call revival

The fastest growing U.S. age group is those 85 years and older, and this demographic is expected to quadruple between 2000 and 2050. While this growing homebound population needs assistance with many activities required for daily living, just 12% report currently receiving home-based primary care.

New technology is also making it easier to deliver modern health care at a patient’s home. Many diagnostics like blood tests, electrocardiograms and even X-rays can now be done at the point-of-care.

In 2006 Medicare added higher-level CPT codes for home visits and more than doubled payments. More recently, the Center for Medicare and Medicaid Innovation has piloted efforts to incentive physician house calls. Early initiatives like the Independence at Home Project have had good results.

The goal behind these changes is to incentivize providers to offer house calls to patients in need while reducing the payers overall costs. This works because health care spending is highly concentrated – the costliest 5% of patients consume 50% of health care spending.

Early models show that, properly implemented, house calls can save major health systems millions of dollars a year. Beyond that, they’re convenient for patients and many doctors love them. As one provider working for Heal shares, “I consider myself one of the happiest clams on the beach, doing exactly what I went to medical school to do.”

Is it OK for doctors to use smartphones in front of patients?